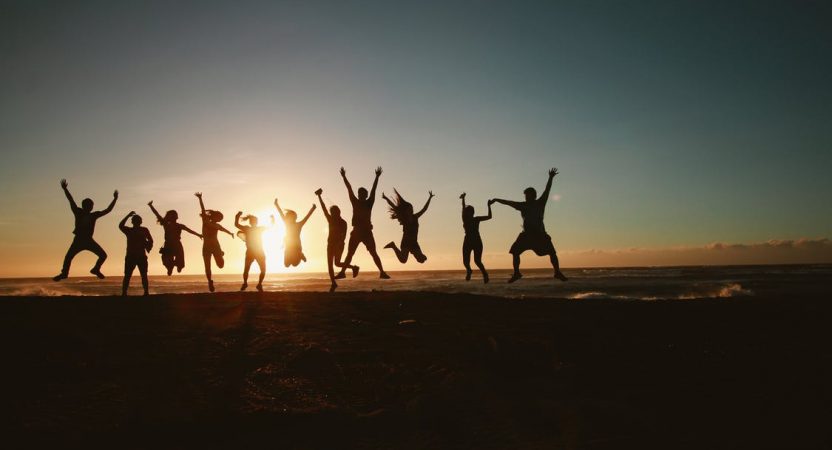 Team building activities are not only meant to take place indoor or in a boring conference room. Most corporate events have to be held outside, where it’s funnier to manage a whole crew. What better than organising outdoor team building events in Barcelona? Where you can always enjoy the sunny and nice weather, the old town’s streets and … the beach! With its 7 beaches, more than 4 kilometres of sand, its harbours and the city aside, Barcelona’s beaches suit perfectly to team building activities!

Dreams and Adventures, based in Barcelona knows how to properly use its environment. That’s why lots of their activities are available on Barcelona’s beaches … But also in other cities’!

Three years planning events with us

A few weeks earlier, we had the chance to organise a team building activity on the beach with a devoted friend of ours. At first clients and now friends, it’s been three years now that they are asking us to plan their company’s anniversary. Because they seem to enjoy it a lot, because they don’t really see it as a boring corporate activity and because they know how profitable it is for the company, this year, they still wanted to celebrate with us! So, why not planning, one week before summer, an aquatic activity on Castelldefels’ beach, where they were actually staying? That’s how the idea of organising a Raft building beach activity came to us.

First thing first, the preparation. We had to keep in mind that we were organising a beach activity for a little less than 100 people. Taking the truck was not an option, such as being well coordinated! As we were loading a lot of materials, we had to keep it tidy: Truck tires, wooden planks, paddles, inflated boats, tables, … After a whole day spent at the warehouse preparing the materials, we were ready for the big upcoming event.

The next day, we took off pretty early as we had to start preparing at 7.00. After 3 hours of setting up the tents, inflating the tires and dispatching all the materials into 7 different packages (as there were going to be 7 teams), we were waiting for the clients to finish their breakfast, organised by Dreams and Adventures as well, in a near restaurant. Time to put on some sunscreen while doing the final checks, as the sun was already beating down. It was almost 10.30 and we could see the participants gently entering the beach … Time to start the team building activity!

For a start, as always, we’re welcoming the attendees. After a short introduction about what they were going to do, it is now time for some icebreakers to put people at ease. As usual I leave the floor to Selena because we’re doing this event in Spanish. Difficult but fun exercise, as we have to make ourselves clear to 80 people. It is now time to give the instruction of the event.

The activity consisted of three different main phases, in order for us to offer a polyvalent experience that suits everyone. The first phase consisted in the designing of the raft. Each team had to think about how they were going to build their raft with all the materials that was provided to them. We obviously supplied them with pens and posters so that they can put their ideas down on paper. But no time to lose, they had to be quick!

The second phase was the building itself! They had to use the truck tires as floaters and the wooden planks as the structure of the raft. We were impressed to see that several boats had different designs! That proved that working together can lead to original outcomes as lots of ideas are shared. Stressing once again the importance of working as a team. Teams were finishing their raft, it was then time to go further and start with 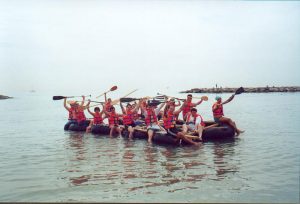 the funniest part … The race!

While rafts were being build, we put some beacons in the sea, to limit the racetrack. We also evacuated the beach with the help of the lifeguards so that every participant has room enough for them and their raft. We could see the first teams approaching and soon, we could fire the starting signal.
Each team were then hurrying up in order to win the race … and some did (way) better than others!

The winning team crossed the finish line barely 15 minutes after the start. We could then reward them while keeping on supervising the others. Selena and Maxi were indeed following every other teams on our inflated boats to be sure that everyone was doing great.  I was in charge of welcoming the winners … Best opportunity for me to practice my Spanish!  People being so nice and happy due to their victory and the fun they just had. I indeed had a great conversation with their boss, where we talked about living in Barcelona. Great opportunity also for taking a dip, as the sun was really aggressive and everybody was chilling while waiting for the lasts teams. After some 15 minutes we were welcoming the last team and it was already time to head back to our tents for a last debriefing. 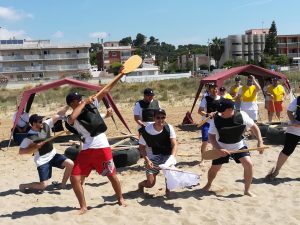 It was at that time that Eva started taking the microphone and making the last part of our beach activity begin. At last, we gathered everybody into a huge circle and started putting music on. A nice dancing activity was taking place. We could see everybody’s best dance moves and becoming really happy thanks to the music. A nice outcome for this polyvalent team building beach activity as everybody was sending and receiving good vibes. Sadly, every good thing comes to an end. We had to conclude the raft building activity as they had to go to the restaurant for lunch. It was now time for us to dismantle, clean and put everything again in the truck. Quickly, I put sunscreen for the third time before getting to work. Sun was at its highest point and was beating down like never.

After two hours of work and a quick lunch break on the beach, it was time for us to say goodbye to Castelldefels and its beautiful landscape. But first, a quick stop at the restaurant where everybody’s eating. We still have a surprise for them: we indeed enter the restaurant, hiding a small bag behind our back. After a small speech explaining how great it was for us to organise an event for them again, and how much fun we had, we opened this small bag. Selena started giving the ranking of the raft race, and the first ones, with a thunder of applause, were rewarded with medals! We could then leave the place with a light heart and lots of smiles engraved in our memories.

Now, time to get back to the truck and get home to heal our sunburns that we consider as scars from this wonderful experience!

You can here have a look at the video we made during this event. If you’re interested in booking a Raft-building, or any other beach activity for Team building in Barcelona (or elsewhere), please have a look at our catalogue here

This author hasn't written their bio yet.
has contributed 0 entries to our website, so far. View entries by .